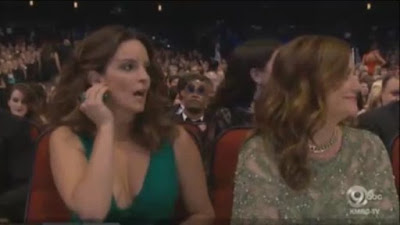 It was an unusually dark moment in the vanilla-as-Puddin’-Pops ceremony known as the Emmy’s Awards when a certain “Dr. Bill Cosby” was crisply announced as the next presenter.

Turned out it was a bit of particularly ballsy trolling on behalf of host Jimmy Kimmel, who quipped, “Don’t worry, he’s not really here. I just wanted to see what you guys would do.”

The audience went ashen and gaspy. A certain Tina Fey attempted to quell her own rapidly melting face as she boggled at the announcement, quickly recovering when she realized it was a joke.


Twitter quickly seized on the moment with a vice grip and has yet to release its grasp:

Tina Fey saying "that's gotta be a joke" with mild panic on her face after the fake Cosby intro was all of us, right? #Emmys
— Emerson Collins (@ActuallyEmerson) September 19, 2016

Tina Fey's panicked look when they announced Bill Cosby is one of the top ten moments of the year #Emmys
— Josh McLean (@RadioMcLean) September 19, 2016