A tumblr page claiming the attack was because of anti-LGBT violence has been deemed "not credible."
From: NewNowNext

The FBI is looking for a New Jersey man in conjunction with the bombing in New York on Saturday night.

The bureau has received a search warrant for the Elizabeth home of Ahmad Khan Rahami, 28, a person of interest in the blast that shook Chelsea and injured 29 people. 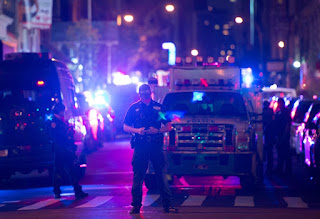 Rahami, who was born in Afghanistan, “should be considered armed and dangerous,” the bureau warned in a bulletin.

He is also a suspect in the pipe bombs found in garbage cans in a train station in Elizabeth and a trash can near the Marine Corps 5K charity run in Seaside.

A tumblr page claiming to be the manifesto of the bomber surfaced on Sunday, calling out violence against LGBTQ+ people as the motive. Investigators have since called the page “not credible.”
Posted by Daniel at 9/20/2016 01:46:00 AM