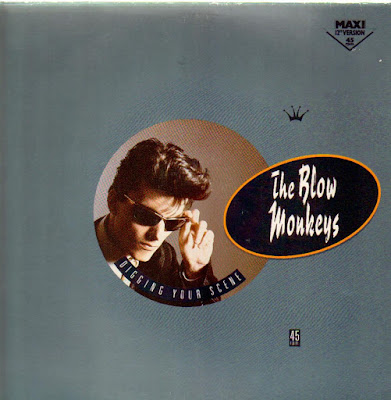 Led by Dr. Robert (who looks like Louis Virtel’s UK cousin), Blow Monkeys hit the chart just once, with “Digging Your Scene” hitting #14 in August 1986. It would be years later that I discovered that this irresistible pop confection actually had a much darker meaning than I ever knew. Dr. Robert explains:

’Digging Your Scene’ was me tipping my hat to the club scene, and then specifically the gay scene within the club scene that … in the early 80’s, that were to me the most exciting thing that was happening at that point in my life. ’Cos I’d kind of broken up with my first wife and I was in-between, and I was kind of enjoying myself. And it was a great scene for me to be involved in. Although I wasn’t gay. You know, 50% of the people in there weren’t. it was just a really refreshing kind of attitude there. And the song was written basically about AIDS and the way that it was beginning to kind of happen to people that I knew within that scene.

There was a little bit of hysteria about AIDS, I think, in the early days here in the tabloids and stuff, you know. It was a bit dodgy, and people were kind of using it in order to kind of slag off the gay scene and the gay culture, you know. And what I wanted to do was kind of say … you know, redress the balance in my own way.
Posted by Daniel at 4/04/2016 06:55:00 PM