Muscles and Mountains & So Much More.... 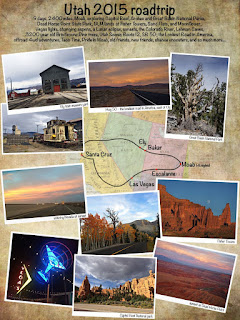 'I did the page above for family detailing Mike's and my driving adventures of getting to Utah. These days the journey is a large part of the fun. Don't get me wrong - the real highlight is the collaboration is the wild places of Utah with the stunning guys, but the process of getting there is great fun too... 9 Days, 2400 miles, Moab, exploring Capital Reef, Arches and Great Basin National Parks, Dead Horse Point State Park, BLM lands at Fisher Towers, Sand Flats and Moonflower, Vegas lights, changing aspens, a Lunar Eclipse, sunsets, the Colorado River, Lehman Caves, 3200 year old Bristlecone Pine Trees, Utah Scenic Route 12, SR50; the loneliest Road in America, offroad 4wd adventures, Taco Time, Pride in Moab, old friends, new friends, chance encounters, and so much more...' 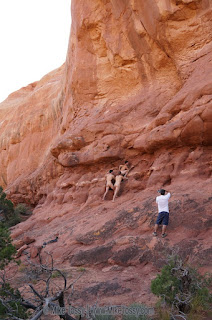 When photographer Gordon Nebeker first broached my featuring Muscles & Mountains, I was, as crazy as it sounds... a little hesitant. It wasn't that I didn't want to, I have featured Gordon's, and fellow artists, and road trip cohorts, Mike Tossy and Mark from StudioMG Photography before. I have always found it challenge however, to find the best way to feature so many incredible images. I am always striving for a way to present the work, so that the beauty of both man and mountain, is not lost in the presentation or by sharing too many photos, and too much info at the same time. Ultimately, as soon as Gordon, Mike and Mark began sending on their images, the work and the story proved so powerful, I was unable, nor could I even imagine, resisting. 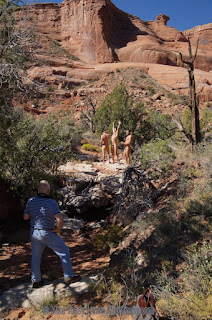 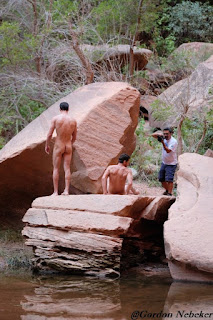 'One thing that made working with these particular models joyful, was that they contributed many of the poses. Some of the best ideas came from the models who could be like enthusiastic puppies with a new toy.'

'The guys came from 3 different states, and didn't meet until Utah. Rob, Will and Joel were all great fun. All had come to us highly recommended by my friend Jeff at ShutterClickPhx. He had worked with all 3 guys previously and knew they would all be perfect for us; not only working together harmoniously, but also getting along well, and giving us whatever we requested. He couldn't have been more right! They also represented three different age groups, early 20's, early 30's, and early 40's. They got along wonderfully, egging each other on and teasing each other. There were many back country adventures but I'm not sure Gordon wants me to go there...!' 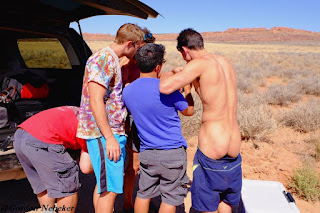 'That first night when we all met in Utah I sent Jeff a text with a photo of everyone together saying we were together and all looking forward to the shoot the next day. He was the 7th person with us, even though he was physically several states away, as we all talked about him during the shoot. The last night at dinner, before going to the Moab gay pride Orange Party, we took a last group photo to show him what a great time we'd all had together. We never could have had the same amazing experience without his guidance in selecting models. We hope to reunite next year, and have him along as the 4th photographer.' 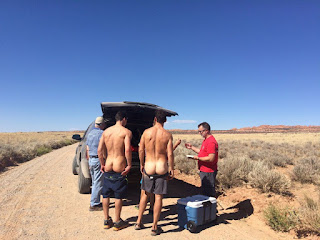 'On the afternoon of the first day, the tire on one of our cars completely shredded as we were heading to a remote shoot location on an unpaved road. Not just flat; completely shredded! It was a group effort to replace it with the spare since no one had ever encountered this kind of situation before (where is AAA when you need them?!) but thanks to everyone’s help, the job got done. A couple of the models even got a chance to work on their tans by shedding their clothes while we worked on the tire which made for an interesting sight, had anyone been traveling that remote road.' 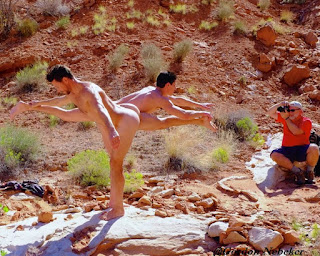 'When shooting all three models we typically have all three photographers shooting at the same time. Given the same models in the same poses in the same settings, originally I was concerned there’d be many look-a-like photos emerging from the three cameras. But, it just doesn't happen often. As photographers we seem to naturally position ourselves above, below, and around the models so that the backgrounds and angles are different.'

'If for example, Gordon is directing and shooting the models at eye level, then Mark seem to be down on the ground shooting up at them (or climbing some rock to shoot down at them), and I’m pulled far over to the left (or right) to shoot them almost 90 degrees off the directed pose. That, combined with tightness of the zoom, depth of field, and different post processing styles, results in a huge variety of shots. When reviewing our work together, the comment “I have almost the same shot” is rare enough to elicit amused chuckles.'
Mike Tossy 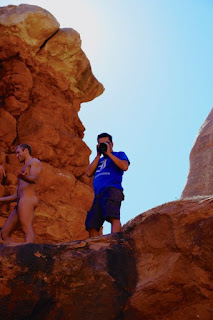 'We all loved the town of Moab, from the funky restaurants to the art galleries, to the annual Gay Pride celebration (okay, I wasn't actually that enamored of the fact that you can't buy a bottle of wine in the super market... that has to be done at the state liquor store). We had chance encounters with old friends, made new friends, and generally had a great time! And, we created like crazy!' 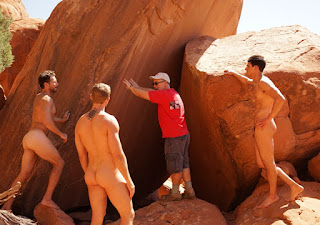 'It always amazes me how much more complicated a group shoot becomes, given the various ideas and schedules of all those involved but it all seems to work out in the end. The logistics were interesting: we had come to Moab from five different states and none of the models had met each other before they arrived nor had any of the photographers worked with any of the models before. And yet we all blended together well and friendships and working relationships were formed and I think we were all a bit sad to say goodbye when the shoot was over.' 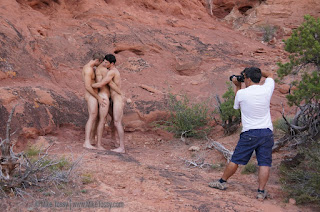 'Everyone combined make this an amazing weekend. From Rob, Will and Joel in front of the cameras, to Mike and Gordon behind the cameras by me, to Jeff in the planning stages.'
StudioMG 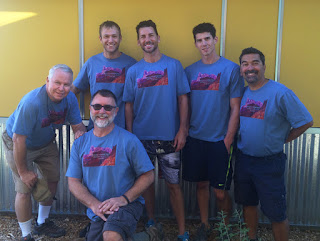 'Over the two days of the shoot, Rob, Will and Joel bonded as friends and worked well together, each one giving us their best. And, yes, since EVERY rock band tour worth its salt has to have its own T-shirt, our band of rock climbers wore their T-shirts for this photo. '
G Nebeker
Posted by Daniel at 12/31/2015 10:57:00 AM