Now that Gus Kenworthy has come out of the closet, among the legions of support being doled out comes the sharpening gaze of those looking to catch the out freestyle skier’s first big media debacle. They didn’t have to wait long. It happened yesterday.

After posting his “sexy cop” photo on Halloween proper, Kenworthy took to Instagram the morning after to give fans a glimpse at his fourth costume (the second and third were not photographed, which might have been best considering where this story goes). 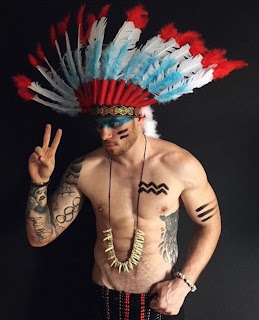 In the now-deleted post (screen grabbed ro the right), Kenworthy is seen dressed as a Native American chief, complete with a feather headdress, painted face and a necklace of teeth.

Remember when Ellie Goulding was under fire for doing this exact thing last year?
Or Jessica Simpson?
Or Pharrell?
Or Khloe Kardashian?
Or Jared Leto?

The point being, this is not the first time (nor, sadly, the last) that a blatantly unaware celebrity has taken the Native American Headdress and turned it into a costume.

Kenworthy should surely be slapped on the wrist for not realizing this. But what makes his indiscretion doubly offensive is his blatant acknowledgment and swift disregard. Though he’s since issued an apology, the caption of his original post makes it clear that he knew the controversial waters in which he was wading.

We need not dissect that comment to suss out the high levels of buffoonery on display.


So Gus Kenworthy dressed as a Native American. Is this the part where we feign surprise that a white gay man is problematic?
— Phillip Van De Kamp (@MajorPhilebrity) November 1, 2015

@guskenworthy & of course, coming out does not give you license to mock or "just have fun" with other cultures. #justhavingfun
— rkg (@ohrohin) November 1, 2015

Kenworthy’s immediate about-face is questionable in its sincerity.

I had to unfollow three hot guys on Instagram for dressing as native Americans for Halloween and each one broke my tiny heart
— Matt Bellassai (@MattBellassai) November 1, 2015

It’s hard to believe he “didn’t realize” and “didn’t mean to” considering the caption in the original photo, which recognized his awareness of the photo being less-than PC.

If Kenworthy wants to be both an Olympian and a social media celebrity (two very different careers, mind you) he’ll need to be more scrutinizing in what content he chooses to post, and its implications (joke or not), or this lapse in better judgment will only serve as the beginning.
Posted by Daniel at 11/02/2015 08:10:00 PM