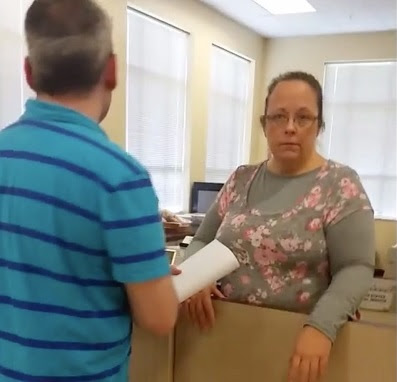 That selfish dolt is at it again.

On Friday, Deputy Clerk Brian Mason's attorney told the judge that when Kim Davis returned to work Monday she "confiscated all the original forms" and replaced them with forms that delete her name, the name of the county and all references to the deputy clerks. The new form has Mason's name and a place for him to write his initials but not his signature. "It also appears to this counsel those changes were made in some attempt to circumvent the court's orders and may have raised to the level of interference against the court's orders," attorney Richard Hughes wrote.
"Mr. Mason is concerned because he is in a difficult position that he continues to issue the licenses per the court's order ... which had some remote questionable validity, but now with these changes may in fact have some substantial questions about validity."
State law requires marriage licenses to be issued under the authority of the county clerk. Someone else, a minister or other officiant, then performs the ceremony and signs the license. The clerk then files the license with county records. Davis has said that any license issued — with or without her name — is not valid unless she authorizes it. However, when she was released from jail she changed the marriage license forms to say they were being issued under the authority of the federal court. Davis' attorney said this new form, if OK with the judge, would solve the problem because gay couples would have a marriage license and Davis would have a clear conscience. But lawyers with the American Civil Liberties Union, which represents the gay couples that sued Davis, said they are concerned the new forms might not meet the requirements of Kentucky state law. Hughes echoed those concerns in Friday's court filing. "Mr. Mason's concern is he does not want to be the party that is issuing invalid marriage licenses and he is trying to follow the court's mandate as well as his superior ordering him to issue only these changed forms,"

Put her in jail NOW.

The Ferret Base said...