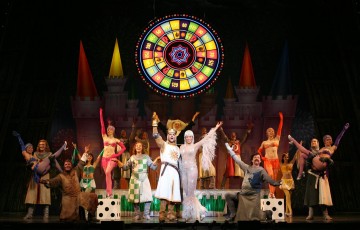 This is the stupidest thing we've heard all day.

A school in northern Pennsylvania has cancelled its production of the musical Spamalot because it contains — get ready for it — a same-sex wedding!

The musical includes the song “His Name Is Lancelot,” a disco-themed dance number which reveals that Sir Lancelot “bats for the other team.” In the closing moments of the show, he and the effeminate Prince Herbert get married. Then the curtain drops. The whole thing lasts less than five minutes.

The production was scheduled for next spring. Dawn Burch, the theater director at South Williamsport High School, says she received an email from Principal Jesse Smith informing her that the content of the musical was “inappropriate.” Initial reports said Smith wrote that homosexuality “did not exist” in their conservative community, though these reports have since been retracted.

Superintendent Mark Stamm responded to an inquiry made by ThinkProgress saying, “We want our performances to be appropriate for the student performers and audiences so that anyone participating or watching can enjoy all aspects of the show.”

Manny Tskitas, whose daughter will be starting 7th grade at South Williamsport in the fall, says he fully supports the school sheltering students from the real world.

“I think in today’s day and age, kids get exposed to things very quickly and a lot sooner than my generation and the generation before. So, for the school to take a stand like that, I’m perfectly okay with that,” he said.

Evidently neither Stamm nor Tskitas got the memo that same-sex marriage was made legal in their state back in May.

Of course, not all parents are upset.

Students, as well, don’t seem to be bothered.

“I’d just seen one of my friends walk with her girlfriend the other day,” Gianna Goegard, a student from South Williamsport, told WNEP news. “It’s definitely in my school and all around.”

Past productions at South Williamsport High School have included family-friendly shows like Urinetown, Grease and Pippin. Evidently themes of corrupt capitalism, social irresponsibility, teen pregnancy, dropping out of high school, and patricide are fine. But gay marriage? That’s way too scandalous.
Posted by Daniel at 7/04/2014 05:26:00 AM