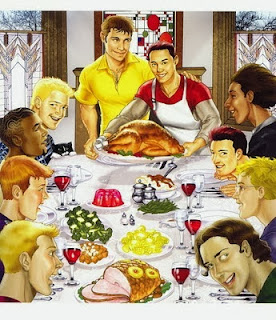 Things to be thankful for this November 2013
President Obama awarding both Bayard Rustin and Sally Ride the Presidential Medals of Freedom.
The U.S. Senate voting to pass the Employment Non-Discrimination Act (ENDA), something that had not previously happened during the legislation's shameful two-decade history.
The Supreme Court striking down a key section of the Defense of Marriage Act (DOMA).
Marriage equality victories this past year in Maryland, Rhode Island, Delaware, Minnesota, New Jersey, Hawaii, and Illinois.
The joy of friendships and the love for ourselves and those we hold dear.
Posted by Daniel at 11/29/2013 06:31:00 PM