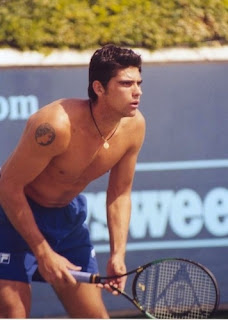 MARK PHILIPPOUSSIS
Australian
Mark Anthony Philippoussis (Greek: Μαρκ Φιλιππούσης; born 7 November 1976) is an Australian former tennis player. He turned professional in 1994. His father is Greek, while his mother is of Italian ancestry.
He has had a minor career in modelling and starred in the American reality television dating show Age of Love. He is nicknamed 'the Scud', after the Scud missile. His career-high singles ranking was World No. 8.
Posted by Daniel at 8/13/2013 10:16:00 PM