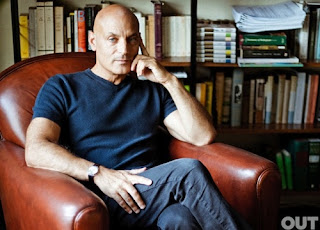 Mendelsohn was born on Long Island and raised in the town of Old Bethpage, New York. He attended the University of Virginia from 1978 to 1982 as an Echols Scholar, graduating with a B. A. summa cum laude in Classics. From 1982 to 1985, he resided in New York City, working as an assistant to an opera impresario, Joseph A. Scuro. In March 1985 Mendelsohn returned to Charlottesville, VA, to prepare for graduate school, and lived there until he began his graduate work in Classics at Princeton University the following year. He received his M. A. in 1989 and his Ph. D. in 1994. His dissertation, later published as a scholarly monograph by Oxford University Press, was on Euripidean tragedy.
Mendelsohn began contributing reviews, Op-Eds, and essays to such publications as QW, New York Times, The Nation, and The Village Voice in 1991, while still a graduate student; after completing his Ph. D. in 1994, he moved to New York City and began writing full-time. Since then his review-essays on books, films, theater and television have appeared frequently in a number of major publications, most often in The New Yorker and The New York Review of Books; others include The New York Times Magazine, Newsweek, Esquire, The Paris Review, and The New Republic. Between 2000 and 2002 he was the weekly book critic for New York Magazine, and between 1996 and 2006 his reviews appeared frequently in The New York Times Book Review. He has been the recipient of numerous prizes and honors both in the United States and abroad; apart from awards for individual books, these include a Guggenheim Fellowship for a translation of Cavafy's "Unfinished" poems, with commentary; the National Book Critics Circle Award Nona Balakian Citation for Excellence in Book Reviewing (2000); and the George Jean Nathan Prize for Drama Criticism (2002).
Mendelsohn's academic speciality was Greek (especially Euripidean) tragedy; he also published scholarly articles about Roman poetry and Greek religion. From 1994 to 2002, he was a part-time Lecturer in the Classics department at Princeton University. Currently, he holds the Charles Ranlett Flint Chair in Humanities at Bard College, where he teaches one course each semester on literary subjects. In April 2008, he was the Richard Holbrooke Distinguished Visitor at the American Academy in Berlin, Germany. In the Spring of 2010, he was a Critic-in-Residence at the American Academy in Rome.
Mendelsohn, who is gay, is one of five siblings. His brothers include film director Eric Mendelsohn and Matt Mendelsohn, a photographer; his sister, Jennifer Mendelsohn, is also a journalist.

Email ThisBlogThis!Share to TwitterShare to FacebookShare to Pinterest
Labels: 100 Most Eligible Bachelors, bald, OUT, writer