“THIS IS THE END” IS EXTREMELY, UNBELIEVABLY HOMOEROTIC

The basic premise of the film? James Franco throws a party and invites all of his cool celebrity friends like Rihanna, Jason Segel, Michael Cera, Mindy Kaling, Jonah Hill, Aziz Ansari and, well, basically everyone. The end of the world happens, and hilarity ensues! Also, as one Manhunt Daily reader revealed to me, things get very, very, very gay. Huge spoilers ahead: 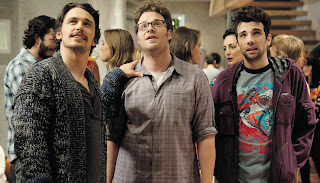 “I know you do movie reviews and mention all the hot naked men, homosexual undertones, etc. Well, last night, I went and saw the comedy This Is The End. I thought I would tell you to check it out for a few reasons. The movie is basically a comedy about the Biblical apocalypse featured in the book of Revelations. In this movie, there is MAJOR homosexual undertones and hints that James Franco is in love with Seth Rogen and totally wants to fuck him. There are hints all over the movie saying that Franco is a big ol’ homo. He even has a statue of giant penis in his house.

“There are also some hints of gay undertones between Rogen & Jay Baruchel. There is some nudity. Like a scene where Jay Baruchel walks in the bathroom to find Michael Cera having his dick sucked and his asshole licked by two women. No dick shots, but a nice good look at his ass. Not bad. There is also a scene where Jonah hill is raped by a demon. A demon with a HUGE dick.


“But here is the best part. The kicker that makes going to see this movie worth it. Near the end, Danny McBride shows up with a group of followers, and he has a “pet” on a leash. It’s a guy in a jockstrap wearing a pink luchador mask. The guy under the mask is revealed to be… CHANNING TATUM! Danny says that Channing is his bitch, and he fucks him whenever he wants, and Channing positions himself, ass up and face down on the ground, doggy style!! It’s worth watching the movie, just to see that. There is also an appearance by Satan with a big ol’ fire dick. It all ends with a sing-along and dance number with the Backstreet Boys, singing “Everybody (Backstreet’s Back)“. All in all, it’s worth watching and reporting on. If only just to see Channing Tatum as a slave, bitch, bottom boy.”

Sorry! I have no more words to type. This description got every ounce of blood in my system flowing to my dick, and I can no longer think.

Watch the trailer (which features none of these seemingly amazing scenes) below: