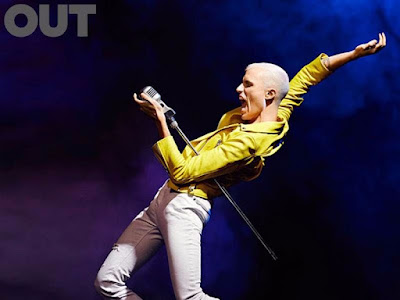 Neon Trees front man Tyler Glenn came out in Rolling Stone in 2014. "Right before the issue was released, I had a purging of all the fear and toxicity that had accumulated over my entire life. I literally wound up in the emergency room, thinking I was having a heart attack." (Out)

Tyler Aaron Glenn (born November 28, 1983) is an American singer, songwriter, and musician. He is known as the lead vocalist and keyboardist of the American rock band Neon Trees and as a solo artist.
Posted by Daniel at 5/26/2017 01:34:00 PM

Email ThisBlogThis!Share to TwitterShare to FacebookShare to Pinterest
Labels: 100 Hottest Out & Proud Celebs, blond, musician, OUT