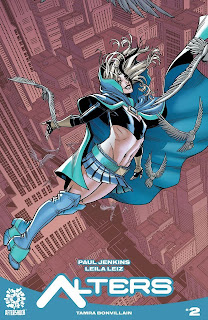 Chalice was introduced in Alters #1 as a still-in-the-closet trans woman, presenting as male with her family but living as a woman in her superhero identity.

Alters has faced criticism for lacking a trans writer, and for focusing too much on Chalice’s struggles being trans, but it’s also garnered a solid fan base. And, it has to be said, this is a level of inclusion that not even Marvel or DC have attempted.
Posted by Daniel at 4/14/2017 08:05:00 AM

Email ThisBlogThis!Share to TwitterShare to FacebookShare to Pinterest
Labels: 13 LGBT Superheroes To Watch Out For, comics, drawing, illustration, superhero, transgender