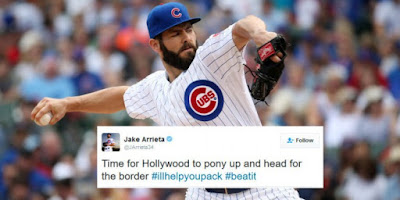 Not so hot anymore, is he? The Chicago Tribune reports:

Cubs President Theo Epstein hasn’t exactly hidden his political views from the public. Last month he gave a donation to Hillary Clinton’s presidential campaign at a fundraiser in Chicago right after signing a five-year, $50 million extension to stay with the Cubs.
But Epstein prefers to separate his political views from his job, and thus was put in a sticky position on Wednesday morning after starter Jake Arrieta tweeted about Donald Trump’s election: “Time for Hollywood to pony up and head for the border #illhelpyoupack #beatit”
The tweet, a reference to celebrities claiming they would move out of the United States if Trump got elected, had more than 14,600 retweets by early Wednesday evening, and Arrieta was being praised and criticized on Twitter for giving the opinion.
At the general managers meetings on Wednesday, Epstein didn’t care to comment on the election results, feeling it was too soon. “I’m still processing,” he said.
When I asked him if he was OK with Arrieta trolling Clinton supporters to his nearly 353,000 followers, Epstein paused. “I’m still processing that, too,” he said. “I believe in the First Amendment. But I also believe we should be mindful of how other people feel.”

Time for Hollywood to pony up and head for the border #illhelpyoupack #beatit
— Jake Arrieta (@JArrieta34) November 9, 2016