“The Olympic Games can look like closure but for me it’s starting a new life with someone."

A Brazilian women’s rugby sevens player has become the first athlete to receive a marriage proposal at the 2016 Rio Games after her girlfriend popped the question following a match. 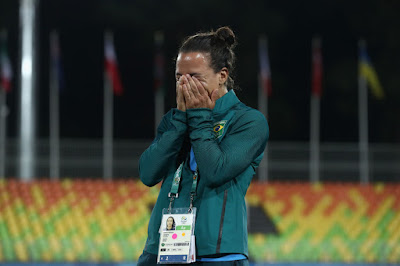 Isadora Cerullo, 25, is a member of the Brazil squad that narrowly missed advancing to the knockout rounds after being bested by Australia.

Though her mood might’ve been down at the medals ceremony later that day, there’s no doubt it lifted once she saw her longtime girlfriend Marjorie Enya grab a microphone and enter the field.

Once Enya reached Cerullo, she made an emotional speech before asking her to marry her. Cerullo said yes and, in lieu of a ring, Enya tied a yellow ribbon around her finger.

The couple then embraced and the crowd erupted into cheers.

“As soon as I knew she was in the squad I thought I have to make this special,” Enya said. “I know rugby people are amazing and they would embrace it.”

“She is the love of my life,” Enya continued to BBC. “The Olympic Games can look like closure but for me it’s starting a new life with someone.”

“I wanted to show people that love wins.” 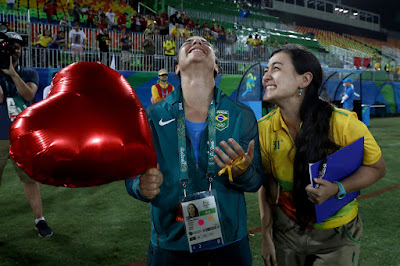 Cerullo, who holds dual citizenship in Brazil and the United States, is originally from North Carolina, but moved to São Paulo with Enya two years ago to begin training for the 2016 games.