"Midnighter and Apollo" launches in October.
From: NewNowNext

When Midnighter launched at DC Comics last comics, it was groundbreaking in numerous ways: Not only was it the first time a gay male character had his own comic book, but he was a far cry from the usual sassy and sensitive stereotypes.

Midnighter’s a brutal anti-hero who can see every move his opponent makes before they make it, and has no problem bringing the hurt. 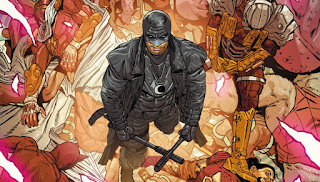 Sadly, the comic struggled to find an audience and was canceled in May after just 12 issues.

But now DC is giving fans a belated Pride present by bringing Midnighter back in October for a six-issue miniseries that reunites him with his super-powered boyfriend, Apollo. 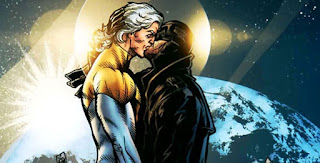 “They have a firmer idea of who they are, and they’ve become stronger and more confident together,” says Steve Orlando, who will write Midnighter and Apollo with art by Fernando Blanco.

Midnighter’s been gay from his first appearance, and has been romantically paired off-and-on with Apollo in the past. (The two are something of a Batman-Superman allegory.) They got married at one point and even raised a super-powered daughter, but when the DC comics universe rebooted, much (though not all) of their shared history was wiped away.

Orlando, who identifies as bisexual, wrote Midnighter’s previous series, which saw the character tracking down stolen technology, trying to discover his own origins and teaming up with the former Robin, Dick Grayson.

Having signed an exclusive contract with DC, Orlando is also writing a new Supergirl launching in August.
Posted by Daniel at 7/01/2016 08:50:00 PM