The goddess of pop is PISSED, and you're going to hear about it!
From: NewNowNext

Cher is deeply concerned about the clean water crisis hitting Flint, Michigan right now, and she’s using her platform to express outrage and draw awareness to the issue.

I Believe Most Elected Officials R Greedy,Dumb,Self Serving & Do Little,2 Nothing 4 The ppl In Their Care. #GOVSNYDERTHATSUBABE
— Cher (@cher) January 16, 2016

The near-poisonous levels of lead in the city’s drinking water have been making people sick for the last two years since the city began taking water from a polluted supply, and the longterm health implications for residents and complacency of Michigan Governor Rick Snyder have become a national crisis that forced President Obama to declare a state of emergency.

Cher involved herself recently by donating 180,000 bottles of clean drinking water to the people of Flint.

Friday, she called in to The View today to discuss the problem with co-hosts and Flint Mayor Karen Weaver. 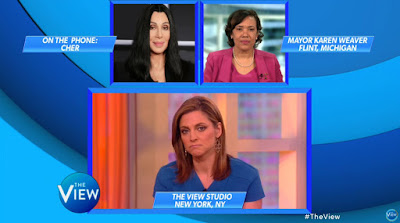 “I grew up as a poor child. I know what it’s like to have no one care about you, or to have no power,” she said.

“I cannot tell you the outrage that I feel. This is going to cause permanent damage. This is going to be a situation that doesn’t allow them to have the equality that they need. I cannot believe the governor would let his grandchildren bathe in this water — he’s either a liar or an idiot.”

Asked by Joy Behar whether Snyder should take responsibility and step down as governor, she said, “Oh yeah. Taking complete responsibility is stepping down when you see what you’ve done, and he knew what he was doing.”

Check out The View’s coverage of the Flint water crisis and Cher’s scathing read of the governor below.