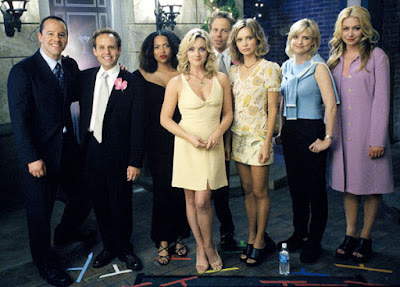 Airing on Fox from September 8, 1997 – May 20, 2002, Ally McBeal introduced us to Calista Flockhart, Portia de Rossi, and was the first major TV role for Jane Krakowski. And it gave us this nightmare fuel …

The theme song “Searchin’ My Soul” (and most of the show’s music) was performed by Vonda Sheppard, who until this show was best known for singing the top ten 1987 duet with Dan Hill “Can’t We Try.”

Endure this poorly recorded version of the intro, which is the only one I could find on the internet.
Much better is Vonda’s video for “Searchin’ My Soul”
Posted by Daniel at 9/16/2015 05:37:00 AM