Spanish Actor Thanks Fans With Full Nude Photo
From:  Queerty 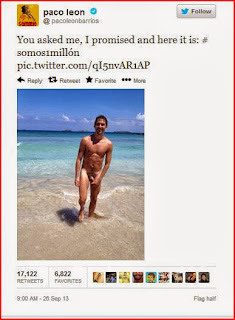 Don’t be embarrassed if you’re as unfamiliar with Spanish actor Paco León as we are. The handsome 38-year-old comic actor found a novel way to increase his fan base — by offering to post a full frontal nude photo of himself if he gained one million followers. Frankly, we’d follow this guy anywhere, clothed or otherwise.
León, a veteran of of numerous TV shows and films, including the gay-themed 2005 comedy Queens, made good on his promise. He tweeted a photo on September 26 of himself walking completely nude on a beach, with the message: “What you asked me, I promised and here it is.” A man is only as good as his word, right?
Based on the photo, the water must not have been very cold. 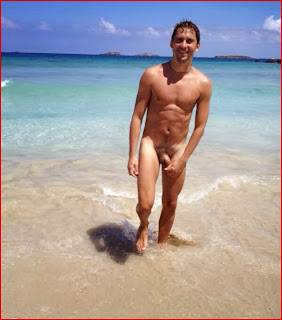