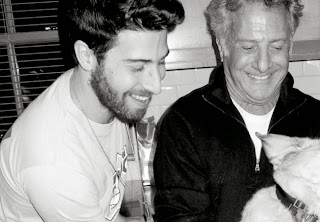 4.
Jake Hoffman
Famous Parent: Dustin Hoffman
Jacob Edward "Jake" Hoffman (born March 20, 1981) is an American actor.
He was born in Los Angeles County, California, the son of actor Dustin Hoffman and Lisa Hoffman (née Gottsegen). In 2003 he graduated from NYU Film School. Since then, he has directed music videos, written and directed short films, and is most known for his work as an actor. In 2006 he played the adult version of Ben Newman in the comedy fantasy film Click, playing Adam Sandler's son. More recently, Jake and his real life father Dustin were cast as grandfather and grandson in the HBO television series "Luck". Jake can next be seen as the lead in the edgy indie thriller "Snap" and in Martin Scorsese's "The Wolf of Wall Street".
Posted by Daniel at 9/27/2013 11:51:00 PM