#97
Cornel Wilde
(1912—1989)
A Hungarian fencer who abandoned a shot at the Olympics in order to act, this Wilde man was more than just a cut-rate Errol Flynn—after early acclaim followed by a long run in B-movies, he reinvented himself as a director and had some success in that area. Virile and handsome, he had a build like a fitness buff you'd find bumming around Venice Beach, which might explain why he was in so many mainstream movies that feel like semi-legit upgrades of things that came out of Athletic Model Guild. 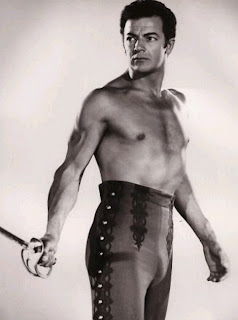