"I feel like I saw this on the news about someone else."

Last August, a video of teen Daniel Pierce being disowned by his family went viral. The video, titled “How not to react when your child tells you that he’s gay” currently has over 8 million views.

“You go by all the scientific stuff you want to; I’m going by the word of God,” Daniels’ stepmom told him in the video. “Since you have chosen that path, we will not support you any longer. You will need to move out and find wherever you can to live and do what you want to because I will not let people believe that I condone what you do.”

The video culminates with screaming and a physical confrontation.

One year later, his life has changed drastically. Though he has not reconciled with his family, not returning home after that night, he’s found something better: inner peace. 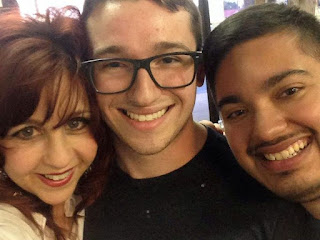 He started by renting his own place. He paid for it thanks to thousands of dollars raised via a GoFundMe campaign set up by his boyfriend. He also landed a job at an Atlanta Law firm to help pay his bills including the cost of hearing aids after his family discontinued his health insurance.

Though he used a sum of the money, he also gave thousands away to Lost-n-Found Youth, a shelter for homeless LGBT children. Now he’s on the board of directors. “We got a huge wave of kids because gay marriage got passed, and they had the guts to come out. They told their family,” he said. “That night I lost five family members. I gained hundreds of thousands of people that are just like ’we love you.’ People I will never meet.”
Posted by Daniel at 9/30/2015 07:20:00 PM