From:  Yummy of the Day 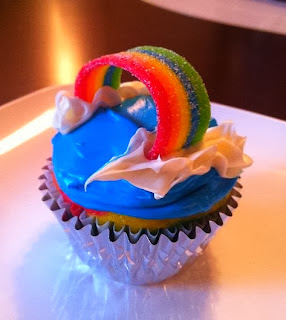 originally posted on 10/12/2008
My younger sister was the first person that I came out to and it wasn't by choice. I was 19, and we were going through our regular morning routine. She was going to High School at the time and I was in my first year of college. As I was blow drying my hair, she came into the bathroom holding a puzzle box that I used to hide my Playgirl magazines in. She held the box open and with a distressed look in her eyes she asked, "Are you gay?" I quickly laughed it off and told her the magazines belonged to Natalie (who of course was my overweight friend who had a crush on me). I explained to her that she wanted me to keep them for her because she didn't want her grandparents to find them at her house. I took the box from her and carried it back to my room. I stood there and began to cry. My sister had always been one of my best friends and I had lied to her.

I went back to the bathroom and before I could say a word, I began to cry again. I told my sister that I was gay and she began to cry. She hugged me and told me everything would be alright. From that point on, it became much easier. I began by telling my friends. The funniest reaction came from one my closest friends, Dee. Her instant response was, "Thank god, I always wondered why you never came on to me!" That statement pretty much sums up the reason why we are still friends to this day.

It was a couple weeks before I approached my parents. I had started seeing someone and one night I ended up staying at his house. I had told my parents that I was with a girl. They seemed so excited since I had never had a steady girlfriend. I think like anyone who is gay, it's the lying that's the most difficult to live with. So I finally mustered up the courage to tell my Mom. I remember it was early in the morning and she was still in bed. Now that I look back, I could have taken a more sensitive approach. I basically said, "Mom, you know that girl that I've been seeing, well she's a guy. I'm gay." To give you a little background on my Mom, she was born in the Philippines and grew up in a strict, Catholic home. So you can imagine, she was not happy. She said everything from "it's a phase" to "why would you want to live that lifestyle". Of course I was outraged by her response.

My Dad's reaction was a little more heart wrenching than my Mom's. He came to me in my room the day after I told my Mom and told me that he knew about the guy I was seeing. He looked to the ground, then raised his head and asked, "Is it because I didn't spend enough time with you as a kid?" I began to cry (trust me, I usually don't cry this much). I reassured him that he was a wonderful father and that it had nothing to do with him. I told him that I had been attracted to men as far back as I can remember.

It is now 18 years later (23 now). I moved in with my Hubby a month after I came out (that's a whole other story) and we've been together ever since. We are proud to say that we have the longest "marriage" out of both sides of our family. And we can't forget our pride and joy, Jr. Now that I look back, I'm glad that my sister was the one that I came out to first. In fact, I'm going to call her today to thank her and tell her how much I love her (I'm also going to ask her what the hell she was doing in my closet when she came across that puzzle box).
Posted by Daniel at 10/11/2014 11:46:00 AM No comments: