Fiorina: I Never Said Gay Marriage Is The Law Of The Land (Except That Time She Totally Did) 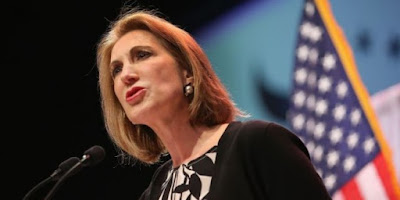 Carly Fiorina, much like the Liberty Counsel, doesn’t understand how the internet works. Via The Hill:

A liberal watchdog group is accusing Carly Fiorina of falsely asserting that she never called the Supreme Court’s decision legalizing gay marriage the “law of the land.” The issue came up in an interview Fiorina gave to Iowa conservative radio host Jan Mickelson last Friday, according to audio first provided to The Hill by People for the American Way’s Right Wing Watch. Mickelson said the idea that the decision is the law of the land “sets off” Iowans. Asked about the comments by Mickelson, Fiorina said, “That is a quote from someone else, not from me. “I know there are many Republican candidates, Kasich among them, who have said those exact words,” she added, referencing Gov. John Kasich (R-Ohio). However, Fiorina did use the phrase to describe the court decision in comments in July, according to a video posted by the Iowa conservative blog Caffeinated Thoughts.