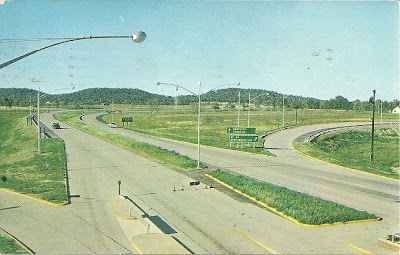 This certainly isn't the first turnpike or interstate postcard I've come across, but the others all show a ribbon of roadway twisting through some woodsy scenery.

I’m down with that. New Yorkers like their nature with a little asphalt. It’s comforting.

But this classically boring postcard is a glorious disaster. The back reads:

“A scene on Kentucky's new Turnpike. This scene was taken a few miles south of Louisville, showing a service area in the background.”

The service area is so far in the background that it’s practically impossible to see. But if the service area is in the distance, then what are we seeing at the bottom of the card? The entrance to a weigh station? The beginning of a cloverleaf? And why is one lane blocked by four cones and a sign? I’d love to know what’s on that sign.

I hoped the handwriting on the card back would be revealing.

Addressed to a couple in Wayland, it reads: “Arrived in Horse Cave, Kentucky 4:15 pm tired but OK. Staying at same place as when we came up. 78 degrees here, have door open. Hope to be home Friday. Lots of love, Mom and Dad.”

I confess that the Horse Cave postmark was even more intriguing than turnpike.
Doing some research, I learned that the town was named after a cave with a massive opening right downtown. It’s actually more of a sinkhole above an underground river, but you don’t attract too many tourists with sinkholes.

Anyway, apparently “hoss” is the Swedish word for “big in stature and big in spirit,” which suddenly makes “Bonanza” cast names more clever than once suspected. Given that this place is in equestrian-happy Kentucky, “Hoss Cave” became “Horse Cave” over time.

People flocked to see Horse Cave, and the fast-flowing underground river was used to generate energy and for the town’s drinking water.

That seemed to work well until sewage started seeping into the water, and the stench became so bad in the 1940s that tours were stopped for 50 years. Downtown businesses even had to close by midday. I suppose the residents are lucky the town name wasn't changed.

A new sewage plant opened in 1989, and the cave was cleaned up enough in the 1990s for tours to resume. Today, the town is home to the American Cave Museum.

The postmark indicates that this card was mailed in October 1965, when the sinkhole – or cave opening – was at its most stinky. I suppose that’s why the kids in Wayland got a postcard of the turnpike instead. 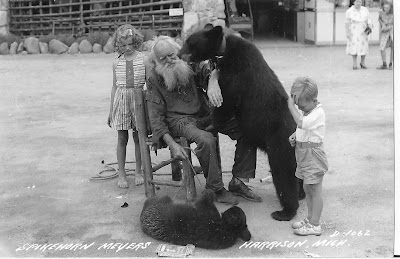 After seeing last week’s bad postcard with a kid riding a giant tortoise, Cynthia Fagen was reminded of this postcard, which is certainly unusual. But it’s special to her because her family members are in the photo – and bears, too.

John “Spikehorn” Myers was a colorful character who operated “Bear and Deer Park” established on his property at the corner of US-27 and M-61 in Harrison that advertised it was the only bear den in the world where guests were allowed to shake hands with the bears.

“I would like to submit this attachment for you bad postcard feature. It is my Mom, Dianne Close Weinert, and my Uncle Brad Close of Claire County playing with Spikehorn Myers’ bears while my great grandmother and grandmother watch from the background,” Cynthia writes.

"It was written in Spike’s memorials that he was frequently sued over ‘maulings’ that occurred at his park.

As a sidebar: I found this on eBay recently while collecting links for Spikehorn memorabilia! In the ‘50s, Spike had his place in Grayling. My Great-grandmother Marie Weaver had a tavern in Farwell and my Mom and her family had a small summer cottage in Lake Claire County.”

Great story! And while we were not sure whether Galapagos tortoise would chew on kids, there’s no debate that bears eat more than honey!
Posted by Daniel at 9/04/2013 06:59:00 PM No comments: