A gay teen who loves and plays sports, and wants to make a difference in the world

In a new column, the Houston high schooler chronicles life as an openly gay student who also loves sports.
From: OutSports 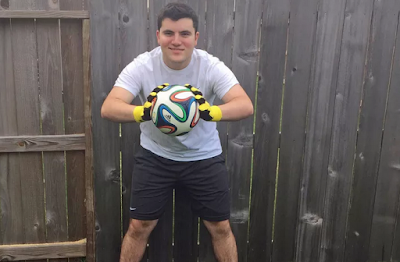 (Editor's note: As part of a class project, high school student Jeremy Brener will chronicle his life as a gay teen sports fan during the school year and touch on issues that affect marginalized communities).

I'm That Dude Jeremy Brener, and I'd like to consider myself an average Joe teenager, who has extraordinary dreams to do something with his life and change the world in one way or another. I also like to consider myself a soccer keeper, basketball coach, and a two-time defending champion fantasy football general manager (an INSANELY proud accomplishment of mine). I also happen to have hazel green eyes, white skin, and an attraction to other guys.

For people who have been reading Outsports over the past few months, you may recognize my name as I have written some articles about the NFL, fantasy football, and Robbie Rogers. I want to start writing That Dude Jeremy to share my story as a normal teenager who likes sports and lives as a gay guy in suburban Texas. I love writing about sports, but I also want to inspire people, much like many others who have used Outsports as a platform before me. If That Dude Jeremy can inspire just one person or make just one person feel like they are not alone, then it is all worth it for me.

I have lived in Texas all my life. Now, that might sound a bit scary, but I am proud to say that I am a Texan and I have been for 17 years and will be for the rest of my life. However, I'm not a typical small-town-Southern-boy. I live in a city called Sugar Land, a suburb of Houston. Houston's mayor is a woman married to another woman, so I guess that's cool. Our mayor is also a representation of how our city and its surroundings are: very accepting. Houston is extremely multicultural, and with a lot of diversity comes a lot of acceptance. My parents did a very good job with me growing up making me think that that's how the world is, where everyone is happy and married with 2.5 kids. I was a very happy kid, played soccer and basketball just like every boy my age (my mom said no to football; she just didn't want me to get hurt) and I didn't think that anything could go wrong. I always felt different, but I always stored that to the back of my brain, but then, the difference started to race back to the forefront of my mind.

I'd like to take a bit of a detour and discuss the inspiration I have from writing my story on Outsports. My school's English classes had an assignment. As a class (along with two others), we had a "service learning" project. The theme was reducing violence against marginalized populations, also known as REVAMP such as women, the LGBT community, and other various minorities.

For the same amount of people who were just as excited as I was to fight for what I believed in, there were a number of opponents. There weren't any other LGBT classmates involved with the project, so I led the charge to have a "Rainbow Day." Even though I am a teenager, living in a world with changing attitudes on the daily, there are still people that don't agree with what I believe in. In order to stand up for what you believe in, you have to understand that not everybody feels the same, and there are people that do not fully understand or accept the changes in our society.

This project led me to realize that I felt very passionate about LGBT issues, along with my interest in sports and writing. For my senior year, I have to complete what's called a Capstone research project, and I asked Jim if I could write a column for the website. Jim and I were on the same page and thought it would be an interesting idea to be able to read articles from a different voice, from That Dude Jeremy, a gay teen who loves and plays sports, and wants to make a difference in the world.

In order to jump on board with this perspective, I want to talk about how I became That Dude Jeremy.

Part of every kid's story is that once you reach middle school, you HAVE to get a girlfriend, and a typical coming out story would mean that you also get a girlfriend to use as a cover-up. That wasn't me. A lot of my friends practiced a religion in which they would eventually get an arranged marriage, or at least wouldn't allow dating at age 13. I never had a girlfriend, and I never will. Except for the girlfriend I had in preschool, but hey, everyone has boyfriends and girlfriends in preschool and the moms giggle and laugh at playgroup and already pre-plan the perfect wedding. For the sake of this story, we'll leave that part out.

Without a girlfriend, I didn't really have anything to do, except sports. I played soccer at age 4, and never really gave it up. I was never a stud goal scorer, or the skilled and crafty ball-handler, so I just wanted to be the team player. I wanted to be that guy to contribute wherever I was needed. I resorted to playing center back and sometimes on the wings, just like my dad. However, one day after practice, something didn't feel right with my leg. My mom thought I was the kid who cried wolf, but the doctor thought I had osteochondritis dissecans, which is just a fancy way of saying that something was wrong with my cartilage in my left knee, which led me to having knee surgery. I had just turned 14, was about to have a surgery, was going into high school, and trying to figure out what was so different about me -- all at the same time, and it hit me like a freight train.

The surgery meant giving up soccer for a long while, which really left me struggling to find something to distract myself from these weird feelings. At that moment in time, I had never met anyone from the LGBT community, or at least knew what it meant. Growing up, I felt like I was inside my little bubble thinking everything was super great and happy and nothing could go wrong, and all of this happening kind of burst the bubble. I did feel a little "different," but I didn't have anyone's feelings to compare to. I thought it was normal to feel "different." Once the pieces came together, I realized what it was: I was gay. It was nice to finally put a name to a face. However, while coming across my realization, I had to learn about the not-so-great things about the world. It made me scared, vulnerable, and very sad. I had to come to the fact that I was a part of a community that universally got a bad rep. I asked myself, "What did I do to deserve this?" and "Why am I this way?" It really did a number on me, but it made me a stronger and better person.

The mistake I did make while I was finding out what it was like to be gay was that I thought it defined me. I thought everyone had to know that I prefer dudes over chicks. I lost some friends along the line because I let it define me. When I came out to my parents, they didn't swing the Bible at me; maybe that's because I come from a Jewish family. Sure, there was a little confusion and struggle, but they've come around and treat me no differently than they did before. Coming out to friends and my parents and learning that I was gay also let me learn that my religion can be defined by myself. I don't have to be a specific level of religious, or political, or stereotypical gay. I can be my own person, I can be Jeremy.

I feel like I adopt the same stance about this as many other young gay athletes, sports geeks and people. We, as a young generation, are fortunate enough to live in a time where people's attitudes are changing. That is why we have so many gay teenage athletes like Michael Martin, Dalton Maldonado, Conner Mertens, and others that have the courage to speak up and come out. They want to lead by example, and so do I. These people have inspired me to want to write and try to make a difference using the tools and the resources I have been granted.

What is the solution for this? We have athletes and people that are willing to come out and face the world that may not understand or accept them and lead by example. My goal right now is to live every day as myself and lead by example. I hope someone reads this and feels inspired to do the same. That is why we have accomplished so much with this generation of gay teenagers. These LGBT teenagers have their examples, like Michael Sam, Robbie Rogers, Abby Wambach, and Jason Collins to name a few, as well as their peers, both LGBT and non-LGBT.

We have a long mountain to climb to get to where we want to be, but we would be absolutely nowhere if we did not have the brave gay teenagers to speak out, be honest, and lead by example. My hope is that by starting this column with Outsports.com, I can add myself to that group of people. Thanks and luego.

Jeremy Brener lives in Houston. He can be reached via email (jeremybrenerchs@gmail.com) or Twitter (@BrenerJeremy).
Posted by Daniel at 9/30/2015 05:02:00 AM