NOW PRESENTING: THE 2013 FLIP-FUCKER OF THE YEAR

This might sound crazy, but I think Trenton Ducati fucked some of his magic into Landon Conrad on the set of Hot House‘s My Doctor Sucks. As some of you might recall, Trenton placed first on last year‘s list, and Landon just squeezed in at tenth place. While I’m too lazy to figure out if Landon actually bottomed more often over the past twelve months, I can confidently say that I spent more time jerking off to his tan lines and the parade of big, hard cocks that plunged his hole.

Sure, sure! The numbers might lean toward “top”, but that’s not what’s important here. Landon could have topped ninety times more often than he bottomed, and I’d still give him this slot on the countdown. The scene with Trenton, in particular, sticks out in my mind as one of the hottest in 2013.

Armond Rizzo is riveting. His raven-black hair and bushy pubes set off a hairless body dense with muscle. He's busy writhing all over Landon Conrad, like an Olympic gymnast doing the floor exercise and Landon is the floor. Landon himself looks daddyish with a full beard and body hair from end to end. Armond's tongue bath of Landon reaches his cock, which points due North. This time Armond lands with his knees on Landon's shoulders, pausing for a kiss before resuming the blow job. Armond's ass is positioned for eating, and Landon doesn't hesitate. Armond's sculpted ass, his muscular back and the constant swiveling of hips make compelling viewing. The next maneuver puts Armond on Landon's lap with a cock in his ass. Armond's compact stature means his hole is always tight and the walls are stretched wide by the fat cock that's drilling him. Landon alternately kisses Armond's lips and his nipples while he fucks him. Landon's muscled shoulders tense up to shoot his load in Armond's mouth. Two fingers in his ass push Armond over the edge, shooting a wad. 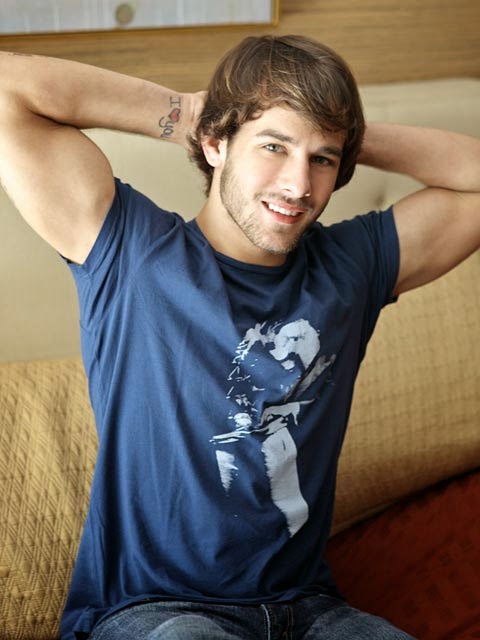 Your Hunk of the Day: Anderson Davis

Email ThisBlogThis!Share to TwitterShare to FacebookShare to Pinterest
Labels: actor, briefs, bulge, model, swimwear, Your Hunk of the Day

Tommy Defendi is relieving himself in a bucket. Jimmy Fanz, peering out behind a dirty shower curtain, can't take his eyes off that humongous cock. He slowly crawls towards Tommy, his lips ready to capture the last drops. Tommy's dick grows bigger and harder in Jimmy's mouth and the veins throb. Tommy growls as his cock sinks deeper into Jimmy's determined throat. Jimmy sucks Tommy's balls, nearly the size of his fist, and slaps his face with Tommy's cock. He looks up for approval while running his lips along the length of Tommy's wet shaft. Jimmy gets that approval with a kiss, followed by Tommy's tongue in his hairy ass. Tommy grabs Jimmy by the throat and slides his tongue into Jimmy's mouth as he slides his cock into his ass. Jimmy's body welcomes Tommy's massive meat, more so with each slamming and plundering of his gut. The sexual heat these guys generate could set this cell on fire. Tommy fucks Jimmy like a rag doll, tossing him around, slapping him, fucking him on his feet, on his belly, on his back until they erupt like fireworks, their bodies glued together by jism. 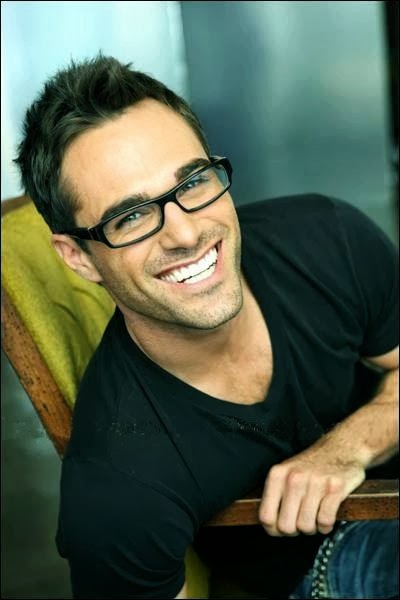 Every Monday through Friday a new Dish of the Day is featured. If you haven't yet voted in last week's Deep Dish Pool Party, choose your three favorite hunks in the sidebar poll here.

Email ThisBlogThis!Share to TwitterShare to FacebookShare to Pinterest
Labels: actor, Dish of the Day

You Must Remember This: 14 Greatest Gay TV Kisses

Brian & Justin
Queer As Folk
Until QAF, the man-on-man kisses we had seen on TV were either chaste, or played for laughs. This show shocked everyone by showing raw sexuality, and the kisses with high-schooler Justin and eternal bad-boy Brian were a sign of better things to come on TV.
Posted by Daniel at 2/27/2014 09:08:00 PM No comments: Links to this post

69. A Thing of Beauty: For Those of You Who Can’t Get Enough of Colby Keller & Dale Cooper

68. How Do These Czech Hunter Models Keep Getting Cuter?

From:  Yummy of the Day