Take it to the bank, this Dallas landmark is empty
From: The Grand Rapids Press 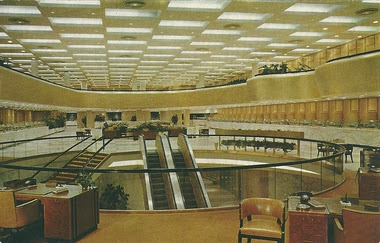 I know from the huge bags of candy and Avengers costumes filling the aisles of my favorite grocery store that Halloween is this month, so I thought this classic ghost town postcard would be appropriate.

We’re heading back to Texas for this week’s bad postcard, showing a massive bank without evidence of customers -- or employees, for that matter.

The back of this 1960s-era beauty reads: “A view of the banking floor of the Republic National Bank in Dallas. A city block in length and covering almost an acre in space, this is considered to be the largest unobstructed bank area ever built. Its rich, colorful décor is accented with maple paneling, marble, glass and gold leaf.”

Let’s start with the description. I’m OK with rich, since we’re in a bank.

But colorful? I suppose there are several shades of brown. Maybe they mean “colorful,” as in the way you describe the really guy at work who talks too loud and keeps giant pine cones on his desk. As in, “He’s kind of, um, ‘colorful.’”

And don’t say Republic National wasn’t giving customers choices, because I see both stairs and an escalator right there.

By the looks of those desks, it doesn’t appear a lot of business was being transacted. Even the in-box is empty. Not even a bowl of lollypops for the kids. Nice pens, though.

And what’s the glory in having the largest unobstructed bank area? It’s not like the ballpark, where I’m bummed about having a big column blocking my view.

Turns out that the outside of this building got a lot more attention, the second in the country with aluminum siding.

It had a rocket ship tower that was visible for 120 miles and the opening party included 4,500 guests and an appearance from Bob Hope. 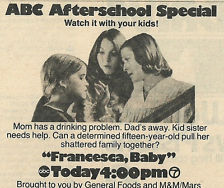 Francesca, Baby
Original Air Date
October 6, 1976
Starring
Carol Jones
Melendy Britt
Dennis Bowen
Tara Talboy
Alice Nunn
Teenage Francesca James has had to pick up the slack at home, to cover for her father Bix's long trips away working, and for her mother Lillian's drinking, which has become worse in the months since Francesca's brother died in an accident. New neighbor Connie helps out, but can't prevent Lillian from ruining Kate's birthday party. Lillian also endangers them by dropping a lit cigarette on her pillow after a binge, nearly causing a house fire. Enough clues have slipped out to Francesca's friends to be concerned, and they invite her to AlaTeen. Angered at first by the approach, Francesca comes to value the things they teach her, and helps Lillian begin to help herself