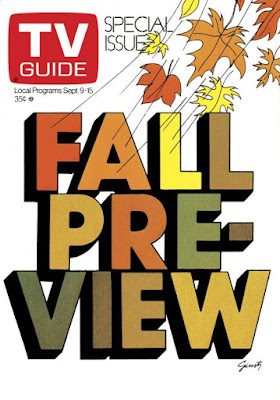 With a new TV season right around the corner, I thought it would be fun to look back at some fall TV promos from ABC, CBS, Fox and NBC (which you then could read about in TV Guide's annual Fall Preview issue). So let's begin with the 1960s and '70s:

Edie Adams and Jerry Lewis appear in this preview of "The New ABC's" 1963-64 season featuring its new round logo.

Garry Moore hosts this preview of CBS's 1966-67 season (the first clip's quality is better, but the second one is the complete show).

Danny Thomas stars in "Remember Next Year?: A Lighthearted Look at NBC's Coming Season", which takes place in 1987 when a magazine writer from the moon wants to know what television was like in 1967.

Here is a 1968 promo for CBS's Mayberry R.F.D., a spin-off of The Andy Griffith Show that ran for three seasons.

It's NBC Week 1968 with The Beautiful Phyllis Diller Show, The Ghost and Mrs. Muir and The Mothers-in-Law.

Hugh Downs and Joe Garagiola from NBC's Today host this preview of the network's 1969-70 season.

A CBS fall promo for The Mary Tyler Moore Show, which debuted on September 19, 1970.

CBS's 1973 Fall Preview featuring Calucci's Department with James Coco: "This Year Like Last Year The Best Is Right Here On CBS" and "CBS is Easy on the Eyes"

Lloyd Bridges from NBC's Joe Forrester hosts this 1975 special to promote the network's "Superseason", which includes The Invisible Man, Movin' On, The Montefuscos, Fay and Ellery Queen.

ABC's "Still the One" preview of its 1977-78 season doesn't mention any of their current shows.

ABC's 1978 Fall Preview features many of the network's stars singing "We're the one you can turn to!"


ABC's 1979 Fall Preview: "Still The One!" with the network's stars enjoying a picnic and riding in hot air balloons.