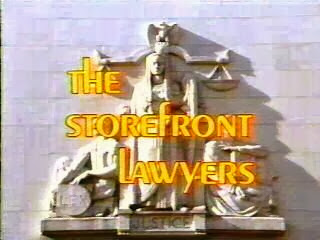 Storefront Lawyers (later titled Men at Law) is an American legal drama that ran from September 1970 to April 1971 on CBS. The series stars Robert Foxworth, Sheila Larken, David Arkin, and A Martinez.

Plot
David Hansen (Foxworth) is a big-shot lawyer who grew tired of his important and expensive Los Angeles law firm. Hansen left his job to start a non-profit firm called Neighborhood Legal Services based in Century City, California. His associates were Deborah Sullivan (Larken) and Gabriel Kay (Arkin). Roberto (Martinez) is a law student who worked for them as a clerk.
After thirteen episodes, the show's format was changed, as Hansen, Sullivan and Kay went to work for Devlin McNeil at the firm which Hansen had quit in the first place.