"These new signals...display the tolerance and celebration of difference in our city."

For the first time, London will be lighting up its crosswalks with LGBT-inspired traffic lights to celebrate Pride.

Approximately 50 crosswalk signals around Trafalgar Square in the City of Westminster have gotten the LGBT makeover, which sees each crosswalk transformed with one of seven unique designs (pictured below). The designs include images of same-sex couples joining hands to form a heart as well as the universal symbol for the trans movement. 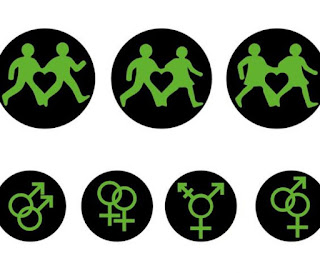 The project has been enthusiastically backed by London Mayor Sadiq Khan who believes the traffic lights embody “one of the greatest things about this city, [which] is our differences. Every Londoner,” he adds, “should be proud of who they are.”

The crosswalk symbols appear at an interesting time for the LGBT community. Following the recent mass shooting at Pulse Nightclub in Orlando, Khan hopes the public display will demonstrate his and the entire city’s desire to stand in solidarity with the victims and their families.

“Our thoughts and prayers are of course still with the families and friends of the victims of the hideous recent attack in Orlando. These new signals show that we stand shoulder to shoulder with them and display the tolerance and celebration of difference in our city.” 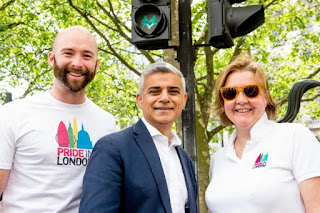 This is the first major LGBT initiative for Mayor Khan, who took office just this year. The lights will be on display for the latter half of London Pride, from June 19 to June 26.
Posted by Daniel at 6/22/2016 05:32:00 AM