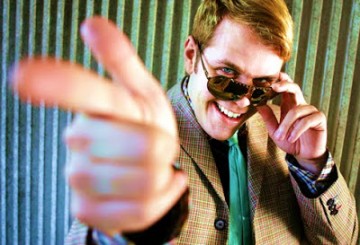 This is almost as unpleasant as the story about that cop who set up a secret “poo cam” so he could video tape guys crapping in a public restroom. It’s not quite that bad, but close.
Perez Hilton fingered another man live on the Howard Stern show this morning.
“Be careful! Be careful!” Benjy Bronk begged as Hilton prepared to insert his finger into his rectum.
Earlier this month, Bronk proposed a deal: If he couldn’t lose 37 pounds, he would allow himself to be anally probed by another man’s finger on the air. The fingering would last for no less than three minutes.
Well, Bronk was unable to lose the weight, and so Howard Stern invited Hilton to perform the proctological duties.
Hilton and Bronk went to an apartment not far from Stern’s SiriusXM studio. Bronk dropped trou then laid back and put his legs in the air. Meanwhile, Hilton slipped on a latex glove and lubed up his index finger.
“Don’t do it hard,” Bronk cried as Hilton prepared to enter him.
When Hilton finally did slip his finger inside, three minutes of obnoxious, ear-splitting screaming ensued.
Listen to the clip below, if you dare. (You might want to keep the volume down.)
Benjy From 'Howard Stern' -- ANALLY PROBED ON-AIR ... By Perez Hilton
- Watch More
Celebrity Videos
or
Subscribe
Posted by Daniel at 6/24/2014 05:15:00 PM