"If we could turn back time maybe he would rethink his actions."

In Portland, OR a pair of rare Cher Barbie dolls helped police link together a string of burglaries that had plagued the city.

The dolls of the iconic singer were among those items found. Payne had been trying to sell them online. 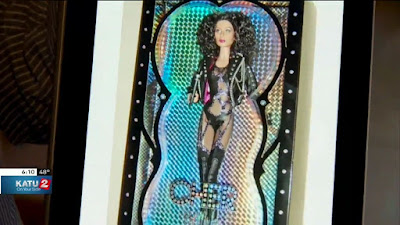 John Eder, the owner of the Cher dolls, took KATU through his house and described the burglary and his missing dolls in the clip below.

“It was two collectors’ Cher dolls that Bob Mackie designed,” Eder said describing the dolls. “For ’Turn Back Time,’ her video, he did a doll with her outfit and replicated it. Another one was ’Half Breed.'”

Of course the “Believe” singer found out about this and had to tweet about it:

Singer, Oscar-winning actress, crime solver—is there anything Cher can’t do?!