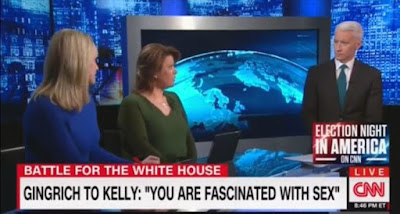 Donald Trump surrogate and former House Speaker Newt Gingrich recently appeared on Megyn Kelly‘s show “The Kelly File” in an explosive segment where he accused her of being “fascinated with sex” for covering the sexual assault allegations against the Republican nominee for president.

Kelly shot back that she wasn’t fascinated by sex, but rather with the protection of women and ended the segment by telling Gingrich to work on his anger problems.

Anderson Cooper has weighed in on the exchange, calling out the irony of Gingrich accusing Kelly of being obsessed with the topic.

“For Newt Gingrich to accuse Megyn Kelly of being fascinated by sex, I mean this is the guy who is on his, what, third marriage, cheated on his first two wives and was having an affair when he was impeaching Bill Clinton,” Cooper pointed out to Trump supporter Scottie Hughes.

Hughes passed the entire exchange as being little more than the result of passions at the end of an election campaign. Cooper pressed the issue.

“For a male like him, with his record on relationships, to accuse Megyn Kelly of being fascinated by sex just seems particularly ironic,” he said.

“I think the word you were looking for is hypocritical,” said Ana Navarro, a Republican strategist who is not supporting Trump for president.

“That would be another word,” Cooper agreed.

“Yes, that would be another word,” Navarro said. “Now let’s remember that Newt Gingrich’s [ex] wife [Marianne Gingrich], when he was running in 2012, told all of us, told the media, said it in public, said it to a camera, that Newt Gingrich had offered her the choice between an open marriage or a divorce. So maybe, just maybe, just maybe if all of that baggage is on your shoulders, maybe you shouldn’t be the surrogate out there wagging your finger…”

She also pointed out that Kelly was reporting on sexual assault, not on sex.

“Let me explain it slowly,” Navarro said. “Sexual assault and sex are two different things. One is unwanted, one is wanted. So maybe they need to understand that to begin with.”

Later in the panel discussion Navarro played an air violin for Trump supporter Kayleigh McEnany when she complained that she wasn’t being listened to because she is a millennial.

“Let me play my old, ancient Stradivarius for you,” she said.

McEnany argued that the American voters are uninterested in the topic of the sexual assault allegations against Trump, minimizing them as “kissing allegations” in a conversation with Lisa Bloom, an attorney for a woman who sued him for harassment in 1997.

McEnany tried to pivot to the accusations against Bill Clinton, which proved unfruitful.