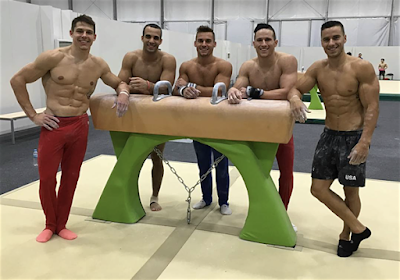 Team USA’s men’s gymnastics team has a novel new idea to get more people to watch them compete: wear less clothing. At least that’s what US all-around national champion Sam Mikulak suggests as a way of getting more eyeballs on their work in a sport where women often get the fame, the glory and the endorsement deals.

Said, Mikulak in an interview with The Wall Street Journal, “Maybe compete with our shirts off” to get more viewers, adding, “People make fun of us for wearing tights. But if they saw how yoked we are maybe that would make a difference.”

Mikulak’s comments reflect a new strategy by team USA to get attention. In short: make everyone thirsty.

You may recall that earlier this year, the men’s gymnasts were in Rio de Janeiro for an Olympics recon trip. The guys made sure to maximize their PR potential by posting a shirtless squad selfie on Copacabana beach that sent the internet into a tailspin.

That [photo] wasn’t an accident. It’s one of the ways they think they can get attention in a country that showers glory upon gold-medal-winning women gymnasts while ignoring America’s less-successful men’s team.
So the men’s team has been brainstorming ways to market their sport better. They would like to be objectified.
[…]
…there’s a feeling on the men’s team that even if they won gold, they wouldn’t enjoy the stardom that America confers upon its top female gymnasts. Jonathan Horton was the top American men’s gymnast at the 2008 Olympics, where he won silver on high bar. That same year, the top American women’s gymnasts were gold medalists Nastia Liukin and Shawn Johnson, who instantly became household names.
“You would think that the top guy in a big-time sport like that could get, like, not a LeBron James contract, but some good money,” Horton said. “You really can’t make a living off men’s gymnastics.”


And there’s something to the idea of working the objectification angle. After all, the biggest story from this year’s opening ceremony was Pita Taufatofua, the Tonga flagbearer who entered the Olympic stadium scantly clothed and oiled-up.

Gymnast Jake Dalton says that showing off is a way Team USA can get attention given the current fitness-obsessed culture. After all, “We have great physiques,” Dalton explains. “Incredible physiques,” he adds

And you can’t really argue with them on that point.


Team USA’s Men’s gymnastics team will be competing in the Olympic final tonight. They have their best chance at winning a team gold medal since 1984. So there’s more to watch than just their taut torsos and thunderous thighs. Though those will be on display as well.

Check out more photos of Team USA in fine form, below.


Sam Mikulak is currently fourth in the all-around standings.
A photo posted by USA Gymnastics (@usagym) on Aug 6, 2016 at 12:50pm PDT


The intensity Brooks has is unreal! Good luck to all on Team Finals Monday! #olympics #rio2016 🇺🇸🇺🇸🇺🇸🇺🇸🇺🇸
A photo posted by John Cheng (@johnkcheng) on Aug 6, 2016 at 2:05pm PDT


Love this team for making last night so much fun, but keeping our eyes set on tomorrow's competition 🇺🇸
A photo posted by Samuel Mikulak (@samuelmikulak) on Aug 7, 2016 at 1:33pm PDT


So stoked the limited edition Brooks X-bands came in before we left!! I'll be keeping my grip straps tight at the games in style thanks to @thegymnastx check out their site for your own style or rock your favorite gymnasts edition. 🇺🇸🇺🇸
A photo posted by Chris Brooks (@cbrooks_gym) on Jul 25, 2016 at 5:40pm PDT


Answering questions you sent in to matebros.com/asksam on snapchat 👻 samuelmikulak #OTClife #freetime @donothanbailey
A video posted by Samuel Mikulak (@samuelmikulak) on Jun 11, 2016 at 3:17pm PDT