"It's a perfect, all-inclusive symbol for everyone."

After months of discussing how best to shift their restrooms from gendered spaces into gender-neutral ones, the owners of Myers + Chang in Boston decided to codify their restrooms with the symbol famously used by the late pop star, Prince.

The crew at the restaurant, who are all self-proclaimed Prince fans, came up with the idea shortly after the singer died this past April. They’d previously discussed labeling their restrooms as “Anyone” or “Everyone,” but said that when the restaurant’s general manager, Kristi McNeil, suggested they use the Prince symbol instead, it seemed like a perfect fit. 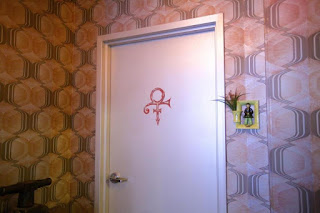 Alexis Weinrich, who works at the restaurant and painted the symbols on the doors, told the Boston Globe that “It’s a perfect, all-inclusive symbol for everyone, and it gives Prince a little love. We were all really sad [after his death], and this was just a light bulb moment for us.”

She admits that though most people get and appreciate the reference, the new signage has confused some of the customers who aren’t entirely sure what gender the symbol is meant to indicate, which is just how Prince would want it anyway.
Posted by Daniel at 6/20/2016 11:34:00 PM