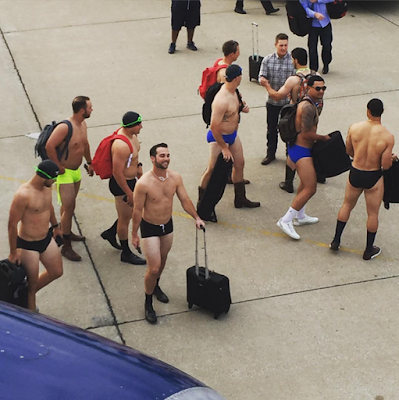 In a season ending hazing, the St. Louis Cardinals' 2015 rookies wore Speedos to the airport.

These MLB Baseball studs were spotted clad in their brief swimwear, socks and shoes or cowboy boots, suitcases in hand and six-packs on display for all to see.  Some of the players got into the spirit and wore neon swim goggles and swim caps, while other maintained a more classical pose.

The hazing did little to improve the Cardinal's post season record.  Despite having the best record in all of Major League Baseball, these speedo clad Cards and their teammates were stripped of glory by the Chicago Cubs in the playoffs.  Other rookies were spotted dressed as professional wrestlers, or in singlets, but the Cardinals shone in their resplendent Lycra briefs.

Well, at least they had each other.