WHO WOULD YOU DO?

The Men of Duck Dynasty 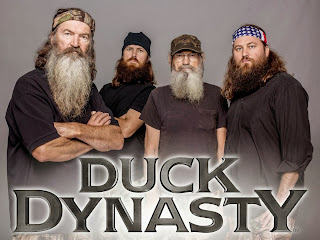 Duck Dynasty is an American reality television series on A&E. It shows the lives of the Robertson family, who became wealthy from their family-operated business, Duck Commander, operated in West Monroe, Louisiana, which makes products for duck hunters, primarily the duck call named Duck Commander. The Robertson men, brothers Phil, Si, and Phil's sons Jase, Willie, and Jep, are known for their long beards. The business began in a family shed, where Phil Robertson spent 25 years making duck calls from Louisiana cedar trees. His son Willie is now the CEO of the company. The family was previously featured on the series Benelli Presents Duck Commander and its spin-off Buck Commander, which still airs on the Outdoor Channel.
The show has broken several ratings records on both A&E and cable television as a whole; the fourth season premiere drew 11.8 million viewers, the most-watched nonfiction cable telecast in history 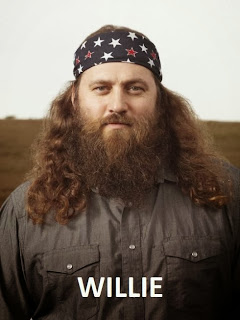 Willie Robertson (Willie Jess Robertson) is Phil and Miss Kay's third son, the CEO of Duck Commander. He used his business degree from University of Louisiana Monroe to take Duck Commander from a family business to a multi-million dollar empire. He is married to Korie Robertson, and they have four children. Willie does the majority of the narration on the show. 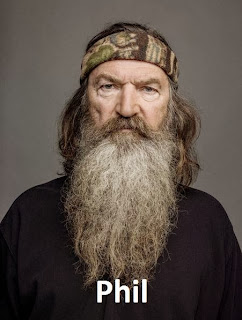 Phil Robertson (Phil Alexander Robertson) created the Duck Commander duck call in 1972 and incorporated the Duck Commander Company in 1973. He played college football at Louisiana Tech University and was offered a contract by the Washington Redskins after his junior year. He turned it down and quit football because it interfered with duck season. Phil is known for his dislike of modern technology (he proudly admits that he does not own a cellphone or a computer) and his concern that his grandchildren are becoming "yuppies". Phil also professes belief in the gospel of Jesus Christ. Like others in the Robertson family he participates in the White's Ferry Road Church of Christ. 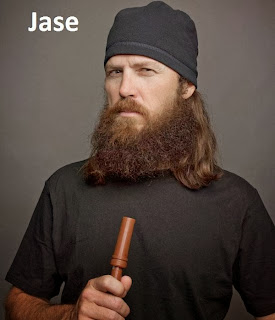 Jase Robertson (Jason Silas Robertson) is Phil and Miss Kay's second son; he is in charge of the manufacturing aspects of Duck Commander.[ Along with other employees, Jase tunes the duck calls by hand. Many of the episodes feature the laid-back, self-professed redneck Jase doing something to aggravate the gung-ho, business-savvy Willie (such as turning a warehouse cleaning into a ping-pong battle). 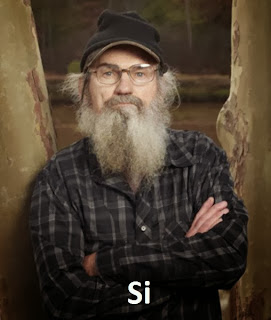 Si Robertson (Silas Merritt Robertson) is Willie's uncle and Phil's brother, a Vietnam War veteran. He works at Duck Commander, making the reeds that go into every duck call. Si is known for his storytelling, his constant use of the expression "Hey!" and the word "Jack" to end many of his sentences, and his ever-present blue plastic Tupperware cup filled with iced tea, which his mother sent him while he was stationed in Vietnam. Si is married to Christine.
Posted by Daniel at 10/29/2013 08:08:00 PM

Email ThisBlogThis!Share to TwitterShare to FacebookShare to Pinterest
Labels: beard, Duck Dynasty, long hair, reality tv, Who Would You Rather