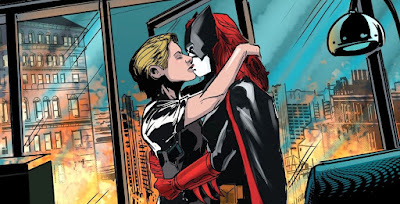 Batwoman has been a part of the DC Universe since the 1950s, and was revamped from Batman’s girlfriend to a lesbian caped crusader back in 2006.

Kate Kane still comes from a wealthy Gotham family, but she was a decorated soldier until she was kicked out of the military under Don’t Ask, Don’t Tell. She’s a lead character in Detective Comics, where she trains some of the city’s younger heroes, and started headlining  her own book again in February.

As with the Ray, her adventures will be chronicled by queer writers—Marguerite Bennett (DC Comics Bombshells) and James Tynion IV (Batman and Robin Eternal). She’ll also be appearing on The CW’s Supergirl.
Posted by Daniel at 4/15/2017 09:17:00 PM

Email ThisBlogThis!Share to TwitterShare to FacebookShare to Pinterest
Labels: 13 LGBT Superheroes To Watch Out For, comics, drawing, illustration, lesbian, superhero