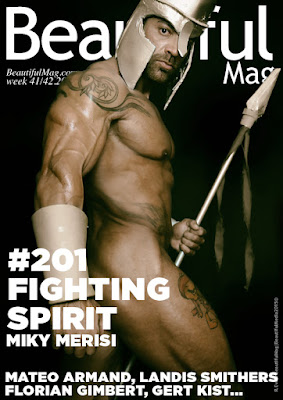 Before you read any further, let me warn you. I might be going a bit on a rant here. I’m not too comfortable with it and if you don’t want to read it, I totally understand. But it is something I need to get of my chest. It’s not the first time, and apparently, or so it seems, it won’t be the last time. So please forgive my self-pity and the fact I might sound like a broken record but bear with me

BeautifulMag was brought to life 10 years ago and safe from the first few months, it never strayed from its true purpose: being a window for – mainly gay – artists that otherwise would have less opportunity to display their work to a broader audience. Since then lots has changed. BM proofed to be a success and gained many followers. Both in fans as well as in other blogs who adopted a similar goal. We do not complain about that, nor do we begrudge others their success. If it is our goals to provide as much exposure as possible, we can only be happy others follow in our footsteps. Mind you, BeautifulMag is a voluntary operation, which means the people working on it – and we are not many – do this out of compassion and love for the arts. What about the advertisement we carry, I hear you ask. Simple: the little money that comes in is directly transferred to fundraising causes. BeautifulMag is not and will never be a commercial site in the sense that we make money on this. I’m not asking for an applause but investing 10 years like that, well, it is not nothing.

Recently we received a nice set of photos featuring a young model. I won’t go in details as my integrity doesn’t allow that, but it suffices to say said model never appeared naked or in any compromising pose on these portraits. We published, the article was online for a few weeks, attracting thousands of viewers and doubtless the usual “takers”, meaning other blogs who took the liberty to use the images for their own good. Unfortunately that is how the Internet works. The goals had been reached: exposure for model and photographer. But know that this goal is not reached that easy. It takes time for the photographer to create and prepare the images, and it takes time and effort for us to compose a fitting story to go with it. Imagine our disappointment when we are asked – not I should say ordered under threat – to take down the story immediately by an agency who claims to represent the model and to own all publication rights over him. They don’t give us proof. We just have to bow down and oblige. We did however find out that the real reason for their negative response was the advertisement we carry. Let me sum it up: banners for male fashion brands, hotels and destination brands and promo banners for photographers we work with. What the hell is so bad about that?

So I started wondering, could the reason be otherwise. Could it be that the agency thinks we are making money over their back? Possibly but if so, it is simply a matter of asking. Could it really be they own all publication rights, in which case I think both photographer and model made a huge mistake signing a contract like that. What could be the real reason why an agency who represents a model does not want that model to be published on a worldwide renowned male photography site. Could it be because our audience is mostly a gay audience? Mmmmmm…. Very possible indeed.

It is a sad world if today, in the 21st century, people who work in the business of beauty and physiques, can still not understand that being published on a gay oriented website (mind you, we are not talking sex or porn) does not immediately label this model as being gay. If this is the reason we are indeed talking about homophobia, and that, more than any of the above reasons, is something I refuse to accept. Having that said, we did take down the article. What other choice do we have? So, to end this ranting, please let me remind all of the photographers, models and models to be out their of the following. When submitting material, please make sure all parties agree, and a release form has been signed. If not, please do not submit the work. Oh, and while I’m at it, let me try to kill one other rumour. Even though other sites apparently do so, BeautifulMag has never, and will never, asked money to photographers to publish their work. Why would we if we are so passionate about it.

Cover photography by Miky Merisi
(editor's letters are musings on actual events and are disconnected from the cover art).